Tom Cruise (as Jack) is left on what remains of Earth to fix drones that are protecting large water sucking machines that produce power for the remaining humans who have fled the now toxic Earth.   His partner, and communications officer, is Victoria (played by Andrea Riseborough).

They are an effective team. 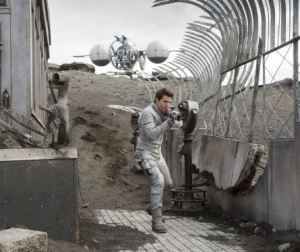 Jack has had his memory wiped to protect himself and other humans in case he is captured by the invading aliens.  But….he is having flashbacks to his life prior to the big war.

One day a spaceship crashes back to Earth.  Jack goes against orders to see if he can help.  At the crash site he finds the woman who is the object of his flashbacks and saves her life.

To see what happens, you will just have to go see it. 🙂

“Oblivion” is more robust, more complex, and more interesting and thought-provoking than what they show in the trailers.  The computer graphic technology is amazing as is the sound.

There is one f-word at the very end (which adds to it’s impact).  The violence is not graphic, and I believe it is ok for the entire family except maybe the very little ones.

Tom Cruise, Morgan Freeman (for as little a role as he has), Olga Kurylenko, and Andrea Riseborough are all excellent.  Jamie Lannister….errrr….Nikolaj Coster-Waldau…..as Sykes is a born leader.