Doris Duke (Susan Sarandon) is the heiress to the Duke tobacco fortune, and is quite the spoiled bitch.

After firing her latest butler because her breakfast melon was too cold, she, luckily, hired Bernard Lafferty (Ralph Fiennes).

The two struck up a friendship that would last for the rest of Doris’s life. 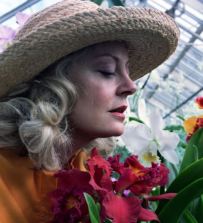 “Bernard and Doris” is a true story about Doris Duke and her butler who inherited a fortune after her death.  Apparently there was a scandal concerning his inheritance, including possible murder, but, he was never charged with wrong-doing.

Unfortunately, Bernard died at the age of 51 (just three years after Doris’s death) of alcoholism complications.

Susan Sarandon and Ralph Fiennes are spectacular as co-dependent alcoholics and dysfunctional friends.  Despite her shortcomings, Doris donated to, and started, many charitable organizations.