“Rise of the Planet of the Apes” Movie Review

Posted on August 6, 2011 by Mike Pihlman Leave a comment 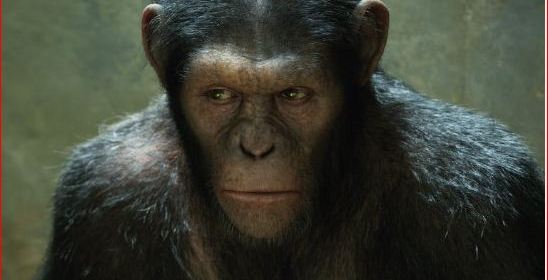 James Franco (as Will Rodman) is a brilliant scientist testing the effects of a drug he has developed to, hopefully, cure Alzheimer’s.   The mission is personal since his father (the brilliant John Lithgow as Charles Rodman) has that disease.

Franco’s latest breakthru is a chimp named “Bright Eyes”.  But something goes horribly wrong and Bright Eyes is lost.  In her cage, the researchers find an infant that Franco takes home to raise and care for.  His Dad names him Caesar (a digital chimp played, at least in part, by Andy Serkis (“my preeeecious…”).

Caesar is VERY smart as a result of the drug Franco injected into his mother.

Unfortunate circumstances force Caesar to be moved into a primate center where he is bullied by Draco Malfoy….err, Tom Felton (as Dodge Landon) while Franco develops a stronger drug to counteract certain limitations of the original drug.

The problem with this new drug, while resulting in extreme intelligence gains in the chimps (and other primates), is that it is deadly to humans. Oops.

Gripping, tense, realistic digital effects, great story, and acting make “Rise of the Planet of the Apes” a truly wonderful movie.  Go see it!   Don’t get up and leave when the credits start..it ain’t over for a few more minutes.

It is a bit intense, in my opinion, for younger kids (the youngest of which will probably be just bored).  But tweens and above should love it (it is PG-13, so be a bit careful). No f-words (unless I missed one), but, intense situations and some violence.

Time to watch the old “Planet of the Apes” movies that Lori loved (Roddy McDowall rocks!)