We went again on July 6, 2016.  Opening for Kenny were:  Old Dominion, Sam Hunt, and Miranda Lambert.  We arrived a bit late (gotta love traffic) so we saw Sam Hunt (Terrific), and Miranda (Boring, put the audience to sleep), and then the ELECTRIC Kenny Chesney.

In the first ever concert at Levi’s Stadium (the home of the San Francisco 49ers) Kenny Chesney shows why he is a superstar and Jason Aldean is not far behind.

Kenny never fails to bring the music to his fans, and once again we were not disappointed, starting with Kenny “flying” in over the crowd like Garth Brooks.

During the show Kenny gave away a 49ers helmet to a young man of about 12, then gave another helmet to a young woman (getting a nice hug) and was also hugged by an unruly fan whom he danced with then spun…..right into the arms of a security guard….good job Kenny!  He and Jason joked about that afterwards.  He also gave away a guitar signed by both himself and Jason Aldean who came back on stage for the last 5 or 6 songs in the encore.

With opening acts Cole Swindell and the vastly improved Jake Owen (he with a short haircut board shorts and no shoes) the Levi’s Stadium audience enjoyed almost 6 hours of high energy country music in Silicon Valley.

Co-headliner, Jason Aldean, started playing while the sun was still out, but, once it set a bit (and the blazing heat on the east side seats stopped), he brought out the fireworks (ala the late great Chris LeDoux) and rocked Levi’s Stadium to it’s core.  Aside: The nice people in front of us have their first starring role in an Internet video (I think) as Lori took pictures of them with their cell phone. 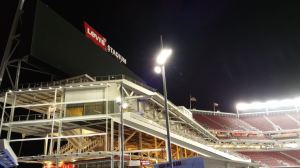 As I mentioned above, this was the first concert held at Levi’s Stadium.  As such, we were test subjects of a sort as they were probably working out all new procedures to handle 50,000 screaming, partying, country music fans.

They did a great job.  The venue seemed to have plenty of food, drink, and bathrooms (as noted by the fact that only 2 women were in the men’s room after the show…there is usually a separate line for women going into the men’s rooms).

This was also our first concert (and hopefully last) where Lori had to have assistance getting around after her broken leg.

This is an official Mike the substitute teacher grade:  A+ to the Mobility Assistance team at Levi’s Stadium. We parked in the Blue Lot 1 near the mobility station then hopped (literally) on a shuttle bus that took us to another mobility station near the venue. There, the mobility team people called George who came with a wheelchair to push Lori to our seats (or close to our seats as they let us stay up top so no stairs needed to be climbed). On the way, George (who also works for UPS) told us about the 60 person jail in the basement and how it was full after the first 49er game. He let me stop and snap pictures of the 49er training facility and get a beer. Customer service at it’s best!

After the show we got another wheelchair ride back to the shuttle and Blue Lot 1.  And, I once again, snapped pictures on the way.

Outstanding service by a great team of people!