Spoilers may happen below…..proceed with caution.

In Star Wars: The Force Awakens” Leia  (Carrie Fisher) was looking for Luke (Mark Hamill) as the rebels were being attacked.  Well, in “Star Wars: The Last Jedi” they found (a reluctant) Luke and sent Rey (Daisy Ridley) to convince him to come help the badly beaten rebel resistance.

But Rey also has another reason for meeting Luke: She is looking for his help to help her understand this weird force that has suddenly appeared within her. Remember…she kicked Kylo’s butt in the last movie.

“Something inside me has always been there, but now it’s awake and I need help” (Rey to Luke)

The rebel resistance is in a world of hurt.  The First Order is very powerful and is on the attack as the resistance tries to run away to a safe hiding place.  Problem is, the First Order has new technology that allows them to follow the rebels via light speed signatures.  Damn…..

Kylo Ren (Adam Driver) has made a decision to fully embrace the dark side and in the process of killing Snoke (Andy Serkis) he solidifies his dark power.

Rey and Luke discover that Rey is a powerful Jedi….very powerful.  The force is definitely with her. And yes, she is the last Jedi, for now at least. 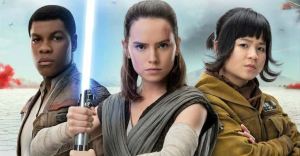 “Star Wars: The Last Jedi” is a bit confusing as it covers a lot of ground (with multiple stories) before completing the handover to the younger generation that was started in the previous movie.  Solo, Leia, and now Luke, are all gone (to one degree or another), leaving the whole mess to Rey, Finn (John Boyega), Poe (Oscar Isaac), the droids (C3PO, BB-8, R2D2), newcomer engineer, Rose (Kelly Marie Tran), and a nearly wiped out resistance.

Yoda returns from the dead, and I assume going forward, so will Luke and maybe Leia, who, by the way, shows Jedi-like power for the first time.  Who knew…..

“The greatest teacher, failure is”  (Yoda to Luke)

Go to IMDb for more information.  We watched this at the Tracy, CA CineMark theater.