According to Susan, Flash is underachieving in his life as he “has a degree” but is content to work in the City’s Maintenance crew.  But, hey, Susan is a jerk, so good riddance.

Shortly after the dumping, Doug was at home drinking his troubles away when he came to the rescue of an injured duck. 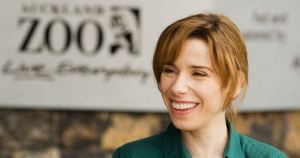 Not knowing what to do, Doug visits the local zoo and talks to the resident bird expert, Holly (Sally Hawkins).  She mostly tells him to let the duck go and too bad for the duck if he does not survive, but, Doug rejects this and Holly gives him the name of a vet.

Since “Pierre” (he named the duck) cannot fly anymore, Doug decides to keep him.  Again needing advice, he goes back to Holly who turns out to be a bit more interested in Doug than she led on, and the two get involved.

“Love Birds” is a fun, lighthearted, movie starring Sally Hawkins before she was a huge Oscar nominated actress.