(Goofball Comedy with a Message)

“Tammy” was universally panned by the “critics”. We have learned NOT to listen to them and to judge a movie (the whole movie not a poorly made trailer) on it’s own merits and see if it meets our requirement of giving us 2 hours, or so, of away time from reality. “Tammy” more than meets our requirement. The hyper-critical critics should actually go see the movie and Warner Brothers should put up a trailer that depicts the entire movie not just one scene. I chose the trailer above after searching for one that actually goes beyond that one scene.

Tammy (Melissa McCarthy, 43 years old) is a “loser”. She loses her job for being late yet again (she hit a deer with her car this time). When she gets home (walking since her car stopped running) she finds her husband eating a nice dinner (that he prepared, he never prepares dinner) with another woman (Toni Collette). 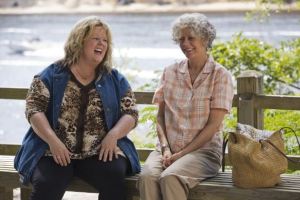 Leaving her cheating husband, she arrives at her mothers (Allison Janney, 54 years old) house (two houses away from hers) and announces that she is going to leave….she just needs a car. Her alcoholic, diabetic, Grandmother (Susan Sarandon, 67 years old) overhears the conversation and declares that she and her grand-daughter will take a road trip to Niagara Falls.

The process of getting to Niagara Falls is long and arduous and funny and, at times, poignant. Yes, poignant….this is not just the movie shown in the poorly made trailers….it is deeper than that, with McCarthy’s goofball comedy as the veneer showing us that underneath the goofiness, yes, life can be difficult, but, with the right attitude, and perseverance, you can find happiness.

An outstanding supporting cast some mentioned above, also with Kathy Bates and Sandra Oh (who absolutely lights up the screen in her brief appearances) makes Tammy a more than decent movie. You won’t see any Oscars, but, if you take the time to watch the movie (not just the stupid trailers) and think about it….you will come away hopeful and impressed…….and you will laugh, and cry, along the way.

Lots of F-words, not for kids and not for the uppity critics who can’t think beyond their nose (or trailer).