We wish Kylie the very best at West Point where she is majoring in Kinesiology. 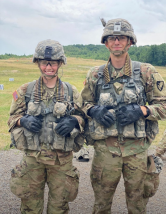 To start my time at West Point, I had a 6-week boot camp (BEAST) that started on June 28. This consisted of extremely long days, (4 a.m. wake-up), rigorous training, disciplinary actions, and no acccess to phone or computer.. Letters were the only form of communication and I’m so thankful for all my friends and family who wrote to me during this time. The days began with upperclassmen (cadre) banging on our doors to lead us to some type of physical training which usually included running, push-ups, burpees, sit-ups and more. There were good days and bad days. The first week we were not allowed to speak to one another. That was tough. The days included four-hour long briefs where we learned about the military and what West Point had to offer us. Other days we learned to shoot, assemble, and disassemble rifles. We had to “qualify” with M4 rifles, hitting a certain number of moving targets. I had never shot a gun before. We got to throw grenades and had to go into a gas chamber. Some nights were spent in the barracks and others we slept out in the field for consecutive days with no shower. It was for sure the toughest six weeks of my life; however, I learned so much and did things I had never imagined, and developed a new way of life that carried into the academic year. 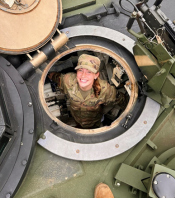 Once the academic year started, (August 8), I was faced with a new set of challenges. I was enrolled in 20 units of core classes (Chemistry, Calculus, English, History, Computer Science, PE, Boxing). I still also had to maintain other military expectations. As time progressed, I developed a better routine to be successful and found a routine that worked for me. My morning starts with mandatory duties consisting of taking out the trash and cleaning the hallways of my barracks at 6 AM, followed by mandatory freshmen breakfast at 7 AM. Classes begin shortly after that at 7:40 AM and conclude around 4:20 PM. My schedule is always busy and I like that; I like the structure and always having something to do. This is one of the main reasons I chose West Point. Additionally, throughout the semester, I began to find things I liked to do outside of academics, and I got involved in some clubs. 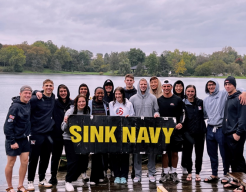 About halfway through the semester, I made a last-minute decision to try out for the scuba team (club), which was the best decision I made. The scuba team is one of the hardest teams to make at West Point because you can only try out as a Plebe (Freshman), and they only accept four people a year. It is the best team I have been on. I am now certified, and by my senior year, I will be certified as an instructor. Additionally, it is a fun way for me to get off the post. I have gone on four trips with them so far, and we are headed to the Canary Islands for Spring Break to dive. It has been an amazing experience so far.

TIME AWAY FROM THE ACADEMY

We are only allowed to leave the post one time per semester as a Plebe; however, there are different ways you can leave. I have left several weekends with the Scuba team. I also ran “Tunnel to Towers” in New York City with the Corp of Cadets. New York City is less than an hour away from the post and I can easily take the train into the city. I plan on making more visits there over the next few years. 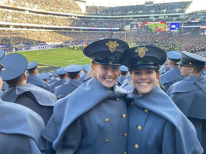 West Point is known for its traditions. It has been amazing to experience some of those already, including the Army-Navy game. This year’s Army-Navy game was so fun to watch this year because the Army won the game in double overtime. The whole Corps of Cadets stormed the field after the game and the whole weekend in Philadelphia was a great time.

If you want to download Kylie’s original PDF of this article….here is the link to Kylie’s PDF Blog Post

“My Freshman Year of College is Over” by Caitlin Dong

“High School vs College and Home vs Dorm” by Caitlin Dong

Cool Things To Do In Tracy, CA by Caitlin Dong

“My Passion For Dance & How It’s Changed” by Caitlin Dong